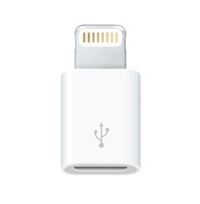 Apple has begun selling its Lightning to Micro USB in the United States for the first time. The adapter, originally released to European customers because of EU requirements, allows users to charge their iPhones using commonplace micro USB adapters.

With the adapter, iPhone 5, iPad mini and 4th-generation iPad users will be able to charge their devices with some of their existing cables.

Support for micro USB charging via an adapter, rather than plugging directly into the phone, is allowed by the EU policy. Apple isn’t required to include an actual micro-USB port directly on the iPhone.